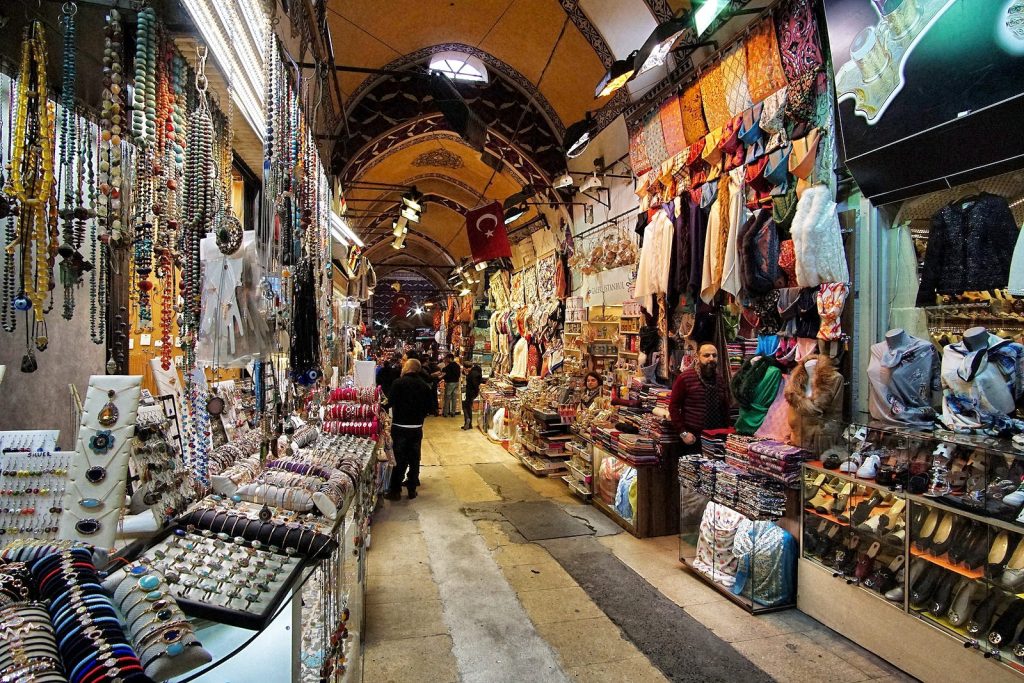 8 places you have to see when teaching English in Turkey

So, you’ve opted for teaching English in Turkey? Congratulations! This vast land that straddles both Europe and Asia is a bucket-list mainstay. It’s laden with mystical ancient temples and glimmering seaside resorts, sun-scorched mountains and spice-scented bazaars. You’ll love what there’s to see on those days away from the classroom…

Between the great rises of the Hagia Sofia and the flowing Bosphorus Strait, no district sums up Istanbul’s place on the highway between east and west better than the Grand Bazaar. It’s been pulsing with the energy of silk, spice, tea, gem, jewel and wood sellers since way back in the middle of the 15th century. Traders would come from the Adriatic and Asia alike to pedal their wares in the covered alcoves, imbuing the place with a multicultural pandemonium that carries on to this day. Delve into its sprawling covered arcades and you’ll soon be lost between stacks of woven carpets, mint-scented tea stalls, shisha dives and twinkling jewelry emporiums.

It was under the reign of Marcus Aurelius – the same of Gladiator fame – that the mighty Aspendos Theatre was raised in the middle of the Antalya backcountry. Carving a deep basin between the citrus orchards and mountains, it’s hailed as one of the most breathtaking ancient relics in the world. It’s ringed by great aqueducts and the remains of an even more ancient city but is famed for its excellent preservation. Later generations even used it as a stopover on the Seljuk trade routes through Asia Minor, while ballet and opera performances still take place on the stage today.

We know teaching English in Turkey can get stressful; all those past-tense tutorials and vocabulary word trees to plan. That’s why Pamukkale is a prime choice for a weekend getaway from the classroom. Cascading down the hillsides just north of Denizli, it steps down countless travertine terraces, washed over by the babbling streams of hot springs where you can bathe and unwind and soothe those post-teaching muscles. The nearby Hierapolis museum is a treat for after the al fresco spas, laden with Phrygian-Roman relics taken from a UNESCO World Heritage Site.

A hub for yachters and sun seekers come the summer, Marmaris might just be the perfect place to remove yourself to when the holidaying months swing around in the big cities. Shrouded by shrub-dressed mountains, fringed with palm-shaded promenades and pretty pebble bays, it’s a haven for the good life during the warmer months of the year. When you’re not topping up the tan, you can join the jet setters in the chichi cocktail joints or jump on a boat to discover hidden coves all around the Turquoise Coast.

Prepare to be wowed by the sheer wealth of historic remains in ancient Ephesus. A UNESCO World Heritage Site – obviously! – and one of the best-preserved Greek colonies in Asia Minor, it’s awash with carved market squares and forums, temples and townhouses, all dating back a whopping 3,000 years! Among the breathtaking treasures are the colonnades of the Library of Celsus, a Roman construction of the 1st Century AD, and the sporadic ruins of the Temple of Artemis, now just a shadow of its former glory.

You’ll need to venture deep into the east to discover off-the-beaten-track Van. It’s one of the more unknown cities of the country, making it a great place for intrepid and adventurous folk teaching English in Turkey. It can be found nuzzling up to a cobalt-blue lake in the midst of rising mountains that are often dashed with snow. It’s long been a flashpoint between Armenian kingdoms and Turkish empires, meaning you can spy out enthralling cone-topped churches and Byzantine citadels all studding the ridges – when you’re not speedboating, hiking or shopping in the Silk-Road bazaars, that is.

Turkey’s Instagram regular, Cappadocia is photogenic to the T. Spreading across the central-eastern heartlands of the country, it’s an ancient land, once home to troglodyte civilizations that carved their homes straight into the rock stacks that jut from the ground. Talking of rock stacks, it’s those curious geological features that have catapulted Cappadocia into the modern limelight. They are called Fairy Chimneys and spike from the Turkish hills for mile upon mile. Taking a hot air balloon to survey them from above is one of the best ways to take in the sheer majesty of the landscape.

Beach-loving folk teaching English in Turkey will want to put shimmering, glistening, postcard-worthy Oludeniz close to the top of their must-visit list. It’s a jewel of the so-called Turquoise Coast, straddling the rugged edge of Mugla Province and the pearly-blue shores of the Aegean Sea. It’s most famous feature is the Oludeniz Lagoon, a small inlet that’s punctuated by a spit of blinding sand. When you bore of swimming and tanning, the woods and scrub-capped heights of the surrounding mountains make for excellent hiking.

If you’re teaching English in Turkey and have something to add to this list, we’d sure love to hear about it in the comments below. If you want more information on how to get qualified and teaching in this enthralling European-Asian wonderland, be sure to check out our Turkey destination page.