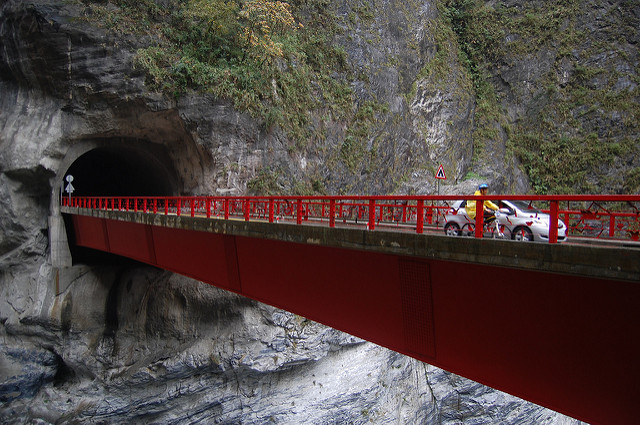 The coolest places to visit when teaching in Taiwan

From the snow-dappled tips of the mighty Hsuehshan Ranges in the island’s center to the uber-modern cityscapes of Taipei and Kaohsiung, the temples of earthy Tainan to the sparkling beaches of the Penghu Isles, there are oodles of treats for the TEFLer teaching in Taiwan. If you’re working in the classrooms and schools of the ROC, be sure to hit up some of these top spots…

The veritable natural jewel of Taiwan’s wilder and largely untouched eastern half, the Taroko National Park can be easily accessed from the city of Hualien. Covered by mighty peaks and rocky bluffs of marble, the landscape here is surely up there with the most breath-taking on the island. There are soaring trekking trails that weave up the crags and over grykes to the tips of Hehuanshan and the Wuling Pass more than 3,000 meters above sea level. There’s the impossibly beautiful courses of the Liwu River, accompanied by the unforgettable tracks of the Shakadang Trail. And then there’s that Eternal Spring Shrine, which straddles the gushing Changchun Falls like something out of a Samurai movie!

If you’re teaching in Taiwan and haven’t made time to explore the island’s throbbing, electric capital city yet, then things need to change! Spiked through at the heart by the shimmering and soaring spire of the Taipei 101 building, this great metropolis is home to the beautiful Chiang Kai-shek Memorial, where locals come to meditate on cool mornings. There’s also the National Palace Museum, laden with Chinese treasures like the Bell of Zhou and oodles of romantic landscape paintings from centuries gone by. Temples and peace parks abound too, while cable cars transport visitors to the less stressful reaches of the Beitou hills, complete with hot springs and babbling highland streams. Nice.

Up-and-coming Kaohsiung was once just a grimy industrial port town of petroleum fumes and huge ocean tankers. Today, the great metropolis (the second-largest in the country) has changed its tune almost completely. It now buzzes with quirky cafes and eateries and a new hip, youthful vibe. It’s got 20th century lighthouses that fuse Baroque and Japanese design; the great gun batteries of the Chihou Fort; and – last but certainly not least – the thought-provoking and uber-cool Pier 2 Art District. Don’t miss the last one, with its sculpture installations, revived railway depots, galleries and coffee shops!

Rising to great heights of almost 4,000 meters above sea level with mighty Hsuehshan – the second-highest mountain in the country and East Asia as a whole – this great swathe of rugged peaks and summits in the heart of the island is a must for any adventurous TEFLers teaching in Taiwan. Draped in plumes of powdery snow by winter and coming to life with verdant pine forests and roaring water ways by summer, the area is perhaps the single best place to wax up the walking boots and hit the trails. There are routes (accessible ones at that) to the top of Hsuehshan itself, not to mention other intrepid journeys along the massifs to the square-cut top of the Dabajianshan bluff. Awesome stuff!

About a third of the way across the Taiwan Strait to the People’s Republic of China is where TEFLers teaching in Taiwan will discover the spattering of islands that is the Penghu archipelago. A land apart from the main island of the country, the terrain here is dotted with hoodoos of metamorphic rock, is flat, rocky and peppered with traditional hutong hamlets raised with coralstone and basalt. The coast brings some of the top draws though, like the ancient fishing pools of the so-called Double-Heart and excellent beaches lining the shores around Jibea Shiwea and Neian. Surfing’s big too, with some of Taiwan’s top windsurfing swells erupting around Shanshui town.

Although now virtually contiguous with Kaohsiung city on the south-western coast of the island, laid-back and temple-dotted Tainan could not be more different from its post-industrial neighbor. Hailed as one of the most ancient cities in the country, the spot has its roots with the Dutch colonists of the 17th century. Buddhist temples and mysterious Taoist shrines dot almost every corner of the place, with that red-roofed Kaiyuen Temple and the Datianhou Gong of the Great Sea Goddess simply not to be missed. Add to that the steamy sausage stalls and coffin bread holes-in-the-wall, the enticing smoothie stands and earthy craft markets of the Anping Old Town, and it’s easy to see why Tainan is a must for any TEFLers teaching in Taiwan!

Are you teaching in Taiwan and think we’ve missed anything? We’d love to hear about it in the comments below! Or, are you eager to get on the road and teaching with that TEFL? Be sure to check out our array of courses online…