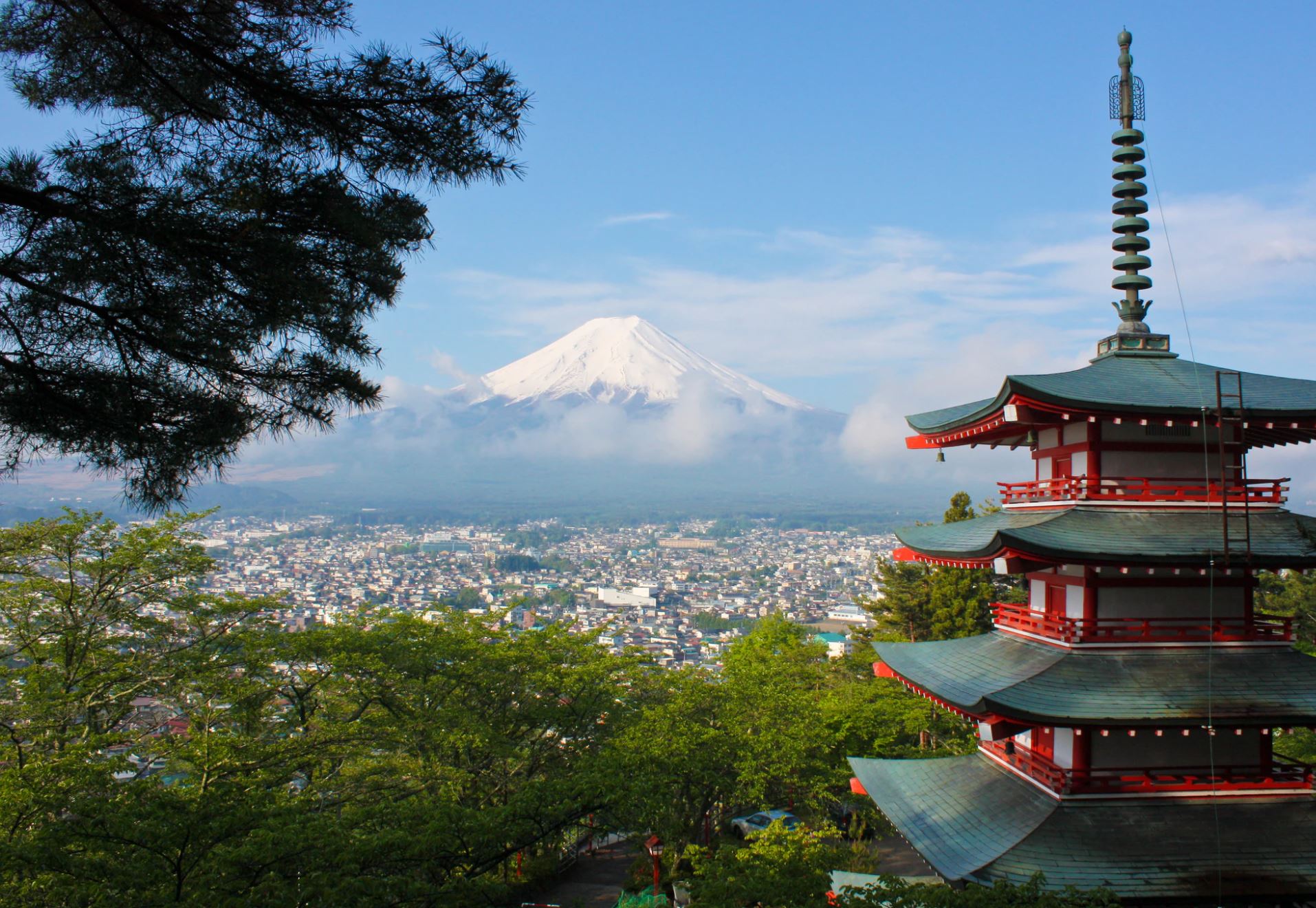 8 places English teachers in Japan should be sure to visit

If you’re lucky enough to have scored a TEFL position in the land of Shinto shrines and sushi, and count yourself among the English teachers in Japan, this list is a must-read. It takes you through snow-capped mountains and into buzzing city districts. It bathes in hot springs and meets monkeys in the bamboo groves. It’s time to get exploring the islands!

The most legendary symbol of Japan rises a whopping 3,776 meters above the forests and cherry fields of Honshu. It’s been a mystical site of pilgrimage since anyone can remember. It’s easy to see why! With its cap of snow, its perfect cone-like topography, and its frequent halo of wispy cloud, the whole of Mount Fuji looks like a sleeping demigod; an abode of spirits and apparitions. Climbing the peak is a challenge, but an experience you’ll always remember. Alternatively, consider hitting the Chureito Pagoda for unrivaled views across to the summit.

There was a time when Kamakura eclipsed even Tokyo. It was the feudal center of Japan from the 12th century onwards, and an incubator for the rich Buddhist cultures that continue to inform the nation to this day. The glory years of the Minamoto shogun that dominated in the 1100s can still be seen in meditative shrines and temple complexes like the famous Kotoku-in, where an oversized Buddha keeps watch over the forested hills. Around that, Kamakura boasts plenty of veggie-organic eateries and even a hip surfer vibe thanks to its wave-rich beach.

Deep in the sylvan hills and mountains of Nagano prefecture is the Jigokudani Snow Monkey Park. It’s known for its resident population of simians, who gather to groom and bathe in the natural onsen. They draw crowds of visitors with their humanlike displays of social behavior, and offer a glimpse into the wilder side of Japan. The surrounding region is known for its hot springs and age-old ryokan inns – so be sure to bag yourself a spa hotel for a little R&R!

Transport yourself back in time with a visit to rustic Shirakawa-go. This is the Japan of old. Untouched and unchanged by the coming of the modern era, it’s a masterclass in the so-called gassho-zukuri architectural style. Keep your eyes peeled for the steep-roofed thatch houses that are often buried in snowdrifts come winter, or encircled by blooming grass meadows in summer. Mountains and woodlands in the vicinity also offer perfect terrain for pulling on the walking boots if you’re keen on a taste of nature.

It’s common for travelers, and even English teachers in Japan, to overlook the draws of Nagoya. Sat between Tokyo and Kyoto, it’s often out of the limelight. But it shouldn’t be. A stepped castle of green-tinged roofs represents one of the greatest powerhouses of the Edo period here. Around it are parks laden with cherry blossoms in the spring. And the city is a fine gateway to the mountains of central Honshu, for hiking in Higashiyama, waterfalls in Yoro, and forest watching in Asuke.

English teachers in Japan who are based in the capital will probably already know of this bustling, beating hub of the megacity. Enter Shibuya – a land of neon lights, glitzy shopping malls, gritty nightlife areas, and human-packed sidewalks. The main draw is often the iconic Shibuya Crossing, where millions (literally!) of people hop the traffic each day. However, you should also check out the colorful vintage shops of Harajuku, and the Shinto shrine at Jingu.

Any English teachers in Japan with a penchant for pulling on the skis and salopettes should be sure to have Hokkaido close to the top of their to-do list. A whole island, it’s the northernmost of the Japan archipelago. That means a unique microclimate that benefits from cold Siberian air currents and some of the finest snow powder on the globe. Niseko boasts one of the most accomplished resorts in the region, but the city of Sapporo is another fine alternative. Come summer, Hokkaido transforms into an alpine wonderland, complete with remote valleys, fir forests, and lakes a la the Rockies!

Bamboo that towers to the skies and shrouds the hiking paths dominates in Arashiyama. A spot that can seem tailor-made for the Instagram feed, this one’s all about native forests of the tall stuff. The whole district is an official place of scenic beauty. Come to delve into the bamboo woods and discover mystical Shinto shrines like the Zen Tenryu-ji Temple or old imperial mansions tucked into the groves. There’s really nowhere else like it on earth!

Of course, there are oodles more amazing places that English teachers in Japan should be sure to visit! If you’d like to mention one, be sure to drop it in the comments below. And if you think it’s time to get exploring this awesome country? Check out our TEFL jobs in Japan page.