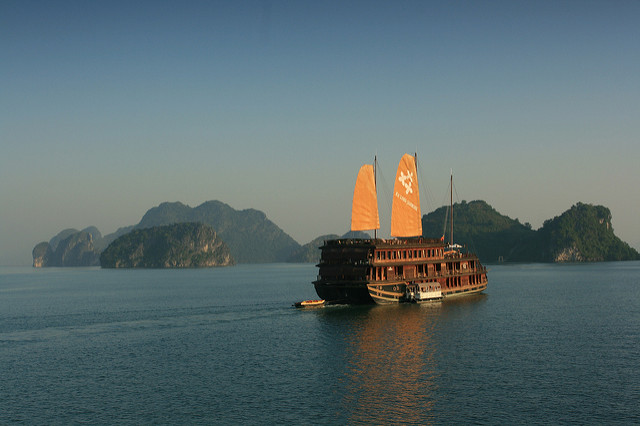 8 places off the beaten track in Vietnam

From the swells of the  South China Sea to Halong Bay alternatives, this list of places off the beaten track in Vietnam is sure to give you some ideas for escaping the usual tourist trails of Indochina. You know, for those days away from the TEFL classroom…

Yes, yes, Halong Bay is certainly the chart-topper. We know. It’s got to be done and all that jazz. But there are alternatives to Vietnam’s most famous UNESCO site too, you know? The best is close by, also within reach from Hanoi; found stringing its way up the Indochina coast in the extreme north of the country. Carved from a colossal limestone plateau that crashes down into the South China Sea, the whole area is sure to take the breath away. You get the same soaring karst cliffs, hidden bays, jungle-topped cliffs and sculpted coastal mountains as the wonder to the south, only without the crowds. What’s not to love?

Cham Island isn’t actually just one island, but rather a collection of eight individual islands that flounder out in the warm waters of the South China Sea, just off from the UNESCO-attested town of Hoi An. Thanks to its medley of incandescent sands (be sure to check out that golden cove of Chong Beach) and the occasional rustic homestay in the jungles, not to mention acclaimed diving rigs in the Cu Lao Cham Marine Park, it’s slowly establishing its position as one of the top places to visit in Vietnam. Get there before the crowds do!

Few cities have been transformed in the last couple of decades like the bustling provincial capital of Buon Ma Thuot. Today, this erstwhile agricultural town of longhouses and river hamlets is an energetic transport hub, and – more importantly for travelers – the gateway to the Dak Lak Plateau in the inner highlands of the nation. It’s slowly becoming one of the favored places off the beaten track in Vietnam on account of its famous coffee sellers, the beautiful Srepok River, and the huge nature reserve of Yok Don National Park – home to elephants, wild forests, gorgeous waterfalls, and plenty, plenty more!

Also named the Heaven’s Gate Pass for its mind-blowing panoramas of the surrounding northern mountains, and the way those winding tracks seem to be reaching for the celestial sphere, the pass of Tram Ton mighty be difficult to get to, but boy is it worth it! Connecting the much-trodden town of Sapa with the chiseled peaks of Lai Chau, it runs for more than 75 miles along the edge of the Chinese border. Along the way, folk can wonder up at the gushing Thac Bac waterfall, see cascading hillsides glow in 10,000 shades of green, and encounter remote hamlets of rice farmers.

Chau Doc takes us to the deep reaches of the Mekong Delta, away from the popular floating villages and endless meadows that blanket the southern sections of the so-called breadbasket of Vietnam. Home to a fascinating fusion of Cambodian and Khmer peoples, large parts of the place stand on stilts above the waters of Indochina’s greatest river. You’ll get to delve into aromatic markets, see huge pagodas and even mosques in the nearby region, or just hit the nearby bird sanctuaries around the floodplains for glimpses of exotic fliers.

For such a big city, the ancestral capital of the Nguyen emperors actually pulls quite a small crowd. However, it’s certainly a top choice on the line-up of places off the beaten track in Vietnam for those interested in unraveling the fascinating histories of warlords and feudal barons that dominated the reaches of Southern Nam’ from the 1700s onwards. What’s more, the metropolis has a down-to-earth, lived-in vibe, with bustling marketplaces fringing the UNESCO-attested monuments of the old Imperial Citadel – something like the country’s answer to China’s Forbidden City.

Why not forget the up-and-coming sand strips of much-visited Phu Quoc (certainly one of the most talked-about beach places off the beaten track in Vietnam), and look instead to the smattering of islets and rocks that is the Con Dao archipelago? In decades gone by, the tiny speck in the midst of the South China Sea was a feared political prison. Today though, things are different. Hammocks swing between the coconut groves. Fishing skiffs bob on the blue bays. Sea turtles clamber over the boulders and the dunes, and the backcountry is encompassed by the gorgeous Con Dao National Park.

Set deep in the northern recesses of the country, the city of Dien Bien Phu is certainly not an easy one to reach. In fact, this far-flung city is closer to Laos than any other major transportation hub in Vietnam, and there are rows of jagged karst mountains cutting it off from the coast. But the isolation can be a real draw, and as soon as you glance up to the jungle-topped hills and verdant valleys that dominate the landscapes all around, you really won’t mind being that far from Hanoi. And then there’s Dien Bien Phu’s other, darker side: it was a fierce battleground in the independence wars with the French Union, and also figured as a major opium producer to boot!

Can you think of any more awesome places off the beaten track in Vietnam? We’d love to hear about them in the comments below. Or, if you think it’s high time you hit the road of Indochina and started your TEFL adventure there, why not check out myTEFL’s offering of courses.