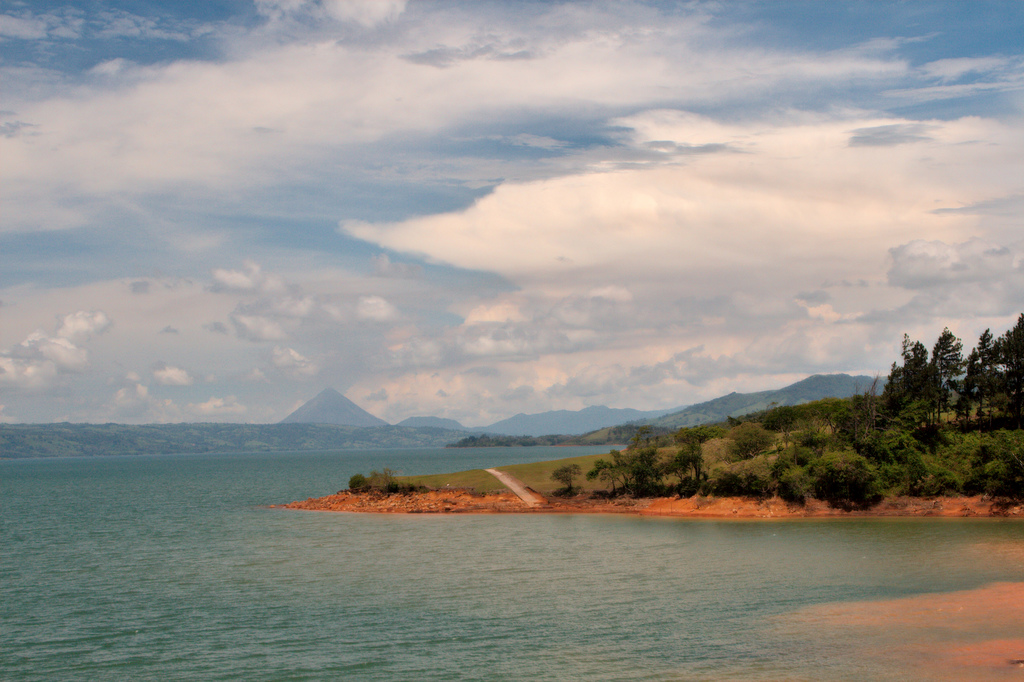 Opportunities to get teaching English in Costa Rica are now popping up all over the place, which means there’s a chance you could be exploring this adventure-rich jewel of Central America this year. But just in case the prospect of 32 days paid vacation, salaries between $750-1000 USD, and working hours of between 17-26 hours weren’t enough turn your head, perhaps this medley of old-growth rainforests, monkey-swinging treetops, wave-splashed beaches, and smoke-spurting volcanos will be!

Make for the little town of La Fortuna, where buzzing backpacker hostels and tin-shack Tico eateries dot the lanes, and you’ll see the hulking rises the Arenal Volcano capping the horizon. It’s hailed as one of the most stunning mountains on the planet, shaped in an almost-perfect cone, belching plumes of smoke and ash whenever it gets grumbly. The national park surrounds the whole thing, encompassing lush tracts of rainforest and gushing rivers, not to mention the gorgeous La Fortuna Falls – they are a must. You can even find rustic eco lodges nestled in the reserve itself – you know, to swap vocab-learning little ones with capuchin monkeys and jaguars for a weekend.

Set under the same brooding volcano as La Fortuna town, the wide and arcing waters of Lake Arenal should definitely be on the itinerary when teaching English in Costa Rica. Set between jungle-dressed mountains and grass-clad hills, the place is a mecca for lovers of the outdoors. It gets a series of strong cross-shore breezes that makes it a windsurfing hub. Others will cycle the lakeside paths – keeping eyes peeled for quetzals and monkeys as they go. Others will hit the forests, where ziplining and trekking are on the menu.

Wax down the board and prepare yourself for some of the best waves in Central America, because the surf’s always up in Tamarindo. But the perfectly-sculpted Pacific swells aren’t the only reason you’ll want to escape to this one while teaching English in Costa Rica. It’s also packed with good-vibes beer bars and little surf-and-turf shacks, magnetizing hedonists and backpackers to the pristine beaches that string along this section of the Santa Cruz coast.

Monteverde is the home of the fabled cloud forests of Costa Rica. They spread over the highlands of Puntarenas Province, blooming with waxy orchids and climbing vines across the tops of the Cordillera de Tilarán. Within their boundaries, wildlife lovers can go in search of some of the world’s rarest and most otherworldly creatures. There’s the show-off resplendent quetzal with its plumes of turquoise and ochre. There are hard-backed armadillos, curious coatis, and galumphing tapirs. You can spy out the lot from a series of heart-thumping ziplines and canopy lookouts, whizzing through the green trees or peering over the tops of the rainforest.

If you can escape from the TEFL classroom to the Manuel Antonio National Park while you’re teaching English in Costa Rica, you’re going to want to be sure to take the camera along for the ride. A land of shimmering white beaches and verdant coastal forests that spills into the Pacific, it’s famed for its unique biodiversity. More than 100 mammals make their home between the silk cotton trees and the sloshing waves. They include the elusive three-toed sloth, the spiny-tailed iguana, and tropical parakeets. And that’s not even mentioning the animals that lurk in the waters where the reserve runs into the ocean – think dolphins and whales.

A town that lives to the off-beats of Reggaeton and the slosh of the slow Caribbean, Puerto Viejo de Talamanca beckons with the promise of hammock time, R&R, and photo-worthy beaches aplenty – it’s the perfect place to go if you’re in need of some chillaxing while teaching English in Costa Rica. Just a whisker away from the Panama border, it’s surrounded by dense palm thickets, and comes with beaches like white-glimmering Punta Uva and wave-bashed Playa Chiquita.

Want to launch your own adventure through the dense jungles and meet resplendent quetzals of your own? Keen to ride the surf of the Pacific and splash in the Caribbean Sea? Be sure to check out our packages that can have you teaching English in Costa Rica and enjoying the good life in this awesome cut-out of Central America…