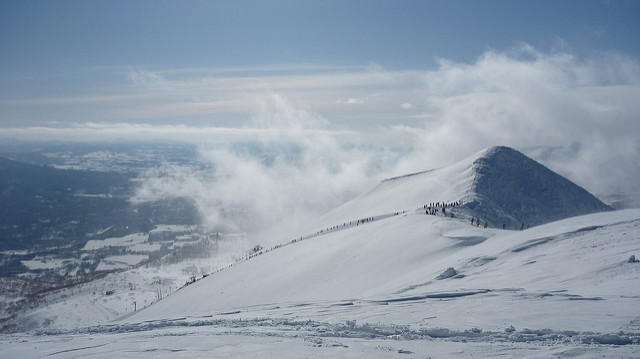 7 places to TEFL and ski this season

With the January snows hitting the Northern Hemisphere, and everywhere from the Rockies to the Alps, the Carpathian ranges to the Hohuan Shah of far-flung Taiwan dusted with fresh powder, there’s never been a better time to strap on the salopettes and enter the winter resorts. Thankfully, for teachers traveling the globe, there are also oodles of places to TEFL and ski; ones that allow you to make it straight from the classroom to the black diamond pistes in no time! Check them out…

The prodigal rise of japan as one of the top places to TEFL and ski has been almost unstoppable. Famed for the fine powder snow of Hokkaido island, the archipelago nation in the Far East benefits from a steady stream of ice-cold air rolling down from Russian Siberia each winter. That produces some seriously awesome conditions for those who love deep drifts and off-piste, especially if skiing on snow-mantled volcanic domes near Niseko, or at family-friendly Furano (great for beginners) is your sort of thing.

Taiwan has just one ski resort between its borders, which can be found sprawled out over the nearly 4,000-meter-high tops of the mystical Yushan peak, right in the middle of the island nation. The season is short, typically lasting just three months and starting in January. And before we get to the skiing, we were never touting this as the next British Columbia – after all, there’s just a single trial and a lone, rickety lift. Still, the novelty of skiing up under the shadow of revered Jade Mountain might just make the five-hour trip from Taipei worth it, don’t you think?

It’s true that most folk heading to the famous resorts of Chamonix and Les 2 Alpes for a whole season will be taking up chalet jobs or rep positions, but there’s plenty of scope to make France one of those top places to TEFL and ski this year too. It might be best to base yourself in the southern cities of Lyon or Grenoble, which have the best access to the high Alps, even though connections from Paris and the north are getting better every year. Oh, we’ve got to mention the sheer quality of the skiing – you can look forward to the legendary Three Valleys (the largest ski field in Europe), guaranteed snow in soaring places like Val Thorens, and uber-apres parties in wild Val-d’Isère.

You’ll have to head south to go skiing in Poland; to where the cobbled streets of the royal city of Krakow give way to the dagger-like peaks of the High Tatra Mountains. Just two hours from the city – which is one of the top places to TEFL in Eastern Europe if you like history and Slavic culture – is where you’ll discover the pistes around Zakopane. The skiing is nowhere near as challenging as the Alps or Pyrenees, but it is cheap, accessible, and rarely gets as busy as other European ski centers.

South Korea is set to host the much-awaited Winter Olympics in Pyeongchang in 2018. That means there’s been loads of investment in the country’s skiing infrastructure, and today resorts like High1, Phoenix Park and Muju Deukyusan can be reached in as little as two hours from the capital at Seoul. The ski season in Korea typically lasts just a couple of months, with January and February pulling in the bulk of the riders.

It’s easy to see why the outdoorsy type in search of places to TEFL and ski will love Italy. In the summer, the rugged mountains of the Sabina Hills crash into the Apennines and the Alps, making for some awesome plateau walking. In the winter, the ranges get dustings of snow, with the Dolomites and stylish resorts like Cortina d’Amprezzo in the north offering the pick of the bunch. Skiing in Italy tends to be famously laid-back compared to Austria and France, not to mention just a tad cheaper to boot!

Okay, so this one might not seem like the most adventurous option out there for those searching for places to TEFL and ski in tandem, but it’s an easy and accessible one for sure. With the booming growth of online EFL positions and Skype-based tutoring, it’s now really easy to build up an income stream as a remote English teacher. That’s great news if you love revealing the secrets of grammar and tenses but can’t bring yourself to leave the beautiful mountains of Whistler or the American Rockies on the doorstep!

Can you think of any more awesome places to TEFL and ski this year? Have you donned the skis and salopettes anywhere on this list? We’d love to hear all about it in the comments below…